Today’s weather map shows how this cold southerly is being produced by a combination of a HIGH or anticyclone in the Tasman Sea, and a LOW or depression between Canterbury and the Chatham Islands. For want of a better phrase, we could call this an eggbeater southerly.

Using the isobars as a proxy for the air flow we can see how the air moving onto New Zealand is coming from around 55 degrees south--- and that’s the Southern Ocean, but NOT from Antarctica. This technique doesn’t show the actual trajectory of the air, but is a good-enough first approximation, and it is one of the ways that enthusiastic weather watchers use weather maps to glean more about the weather. As this cold air moves northwards and encounters warmer surfaces it becomes more buoyant, bubbly and bouncy. It picks up some moisture and turns this into clouds, but, because these clouds are so buoyant, they produce a scattering of showers containing rain, hail, sleet and snow, rather than a canopy of widespread snow. 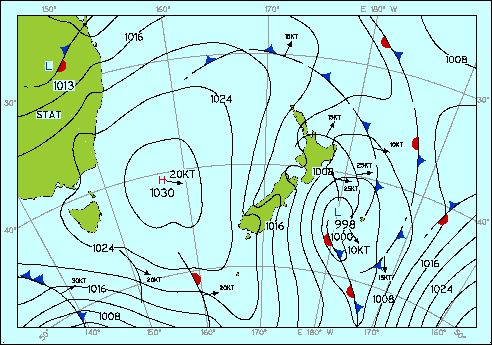 This southerly blast was serious enough to warrant a heavy snow warning for Southland and eastern Otago, and  disrupted transport in the South and across Cook Strait. The weather maps over the next few days showed that this was just the beginning of several days of southerly with the possibility of another Low rolling in from the east to  give another, more compact, eggbeater southerly over the following weekend

When making plans for a weekend remember to check the latest MetService Severe Weather Outlook.

NOTE that this southerly event  LACKS THE MOISTURE of a large scale snow storm such as the one that hit Canterbury in 2006--- in that event a low pressure system conveyed some moist air aloft from the tropics to the South Island which was undercut by very cold air from the south, and brought a period of rapidly dropping pressure to Canterbury, accumulating a canopy of widespread snow. For more about southerly outbreaks read our Learning Centre Article on the Old Man Southerly . Bob McDavitt