I received an inquiry from Laurie Sanders of Tauranga, by way of the Editor of the Bay of Plenty Times,  with some photographs of an interesting cloud formation. Laurie saw it as he was going to work southeast-bound on 15th Avenue at the Cameron Street traffic lights at 7:40 am on Wednesday, 9 December 2009. He took several photos, two of them reproduced here with his permission. I think the cloud formation is a contrail from the Aerolineas Argentinas flight AR1182 from Buenos Aires to Auckland, which landed at 8:23 am on Wednesday 9 December 2009. The aircraft used on this route is the 4-engine Airbus A340. The great circle route from Buenos Aires to Auckland dips well south, and the approach to Auckland is from the southeast.

The view direction of the photo is towards the southeast along 15th Avenue, and the continuation of the trail would cross the southwestern part of the sky towards the northwest and Auckland. Both the timing and the orientation of the contrail are consistent with its being from that flight.

For contrails to form, the ambient air temperature needs to be lower than a certain temperature. This critical temperature mostly depends on the altitude and the relative humidity. It depends on the jet engine type, and engine efficiency to a lesser degree. Usually contrails dissipate a few plane-lengths behind the aircraft, but if the air is moist enough to be ice-saturated they will remain in the sky and behave like any other cirrus cloud. Persistent contrails eventually dissipate or merge with other cirrus.

Atmospheric measurements by balloon-borne instruments released from Chatham Islands, Paraparaumu and Whenuapai indicate that conditions at jet cruising altitude were suitable for the formation of contrails. Also, the humidity was high enough that the air there was ice-supersaturated, meaning that contrails would not dissipate as they do in drier conditions. The aircraft probably commenced its descent into Auckland somewhere over Rotorua and out of the persistent-contrail layer. This is why the trail in the photo stops abruptly. It is possible the plane could have been observed to be making a short contrail for a few more kilometres after the point where the persistent trail stopped, but Laurie says he did not see it. 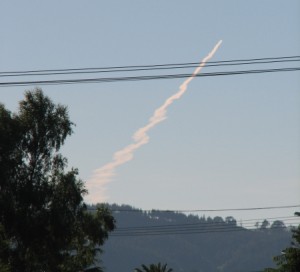 In the first photo, further back along the track of the aircraft, where the contrail is older, the wind is distorting the trail and spreading it a little.
In the second photo, taken only 30 seconds later, the youngest part of the trail is also being visibly distorted compared to its appearance in the first photo. 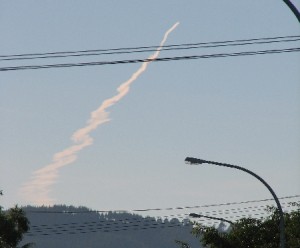 Aerolineas Argentinas has recently increased the frequency of its services. There are now five flights each week, scheduled to arrive in Auckland at 7:55 am on Tuesday to Friday, and on Sunday. The return flight is on the same days and departs from Auckland at 7:30 pm, having been to Sydney and back in the meantime. Interested observers could watch for these in the future. Be aware that, due to the long duration of the flight and the variability of winds en route, the arrival time over New Zealand may be ahead or behind schedule by some time. This particular flight was about 30 minutes behind schedule; on other days it could be that far ahead. Lan Chile and QANTAS also have flights to and from Santiago on six days each week (all except Wednesday), and they operate the same aircraft type. The scheduled arrival time at Auckland is 4:20 am, so observers will need to be up early to see anything of it.

Any contrails will be visible in the night sky if the moon has enough of its disk illuminated. They return to Santiago the same days at 4:40 pm and, as with the Aerolineas Argentinas service, have been to Sydney during the day. Because Buenos Aires is further east than Santiago, the Aerolineas Argentinas flights will usually be further south in the sky over the Bay of Plenty and Gisborne. The initial great circle path heading from Auckland to Buenos Aires is 138°, and to Santiago it is 130°; however, the route flown on any given day will vary depending on forecast wind conditions.

Note: Flight time details may have changed since the cessation of many Airline flights during the 2020 Covid-19 pandemic