On the afternoon of Monday 19 July 2010, a neat set of four persistent contrails moved across the Cook Strait area.  NASA's  MODIS Rapid Response System captured the contrails in the image stream from the Aqua space craft which was over Wellington at about 2:20 pm. You can see the image on the MODIS web site here:  http://rapidfire.sci.gsfc.nasa.gov/subsets/?subset=NewZealand.2010200.aqua.1km  Here’s part of the MODIS image. 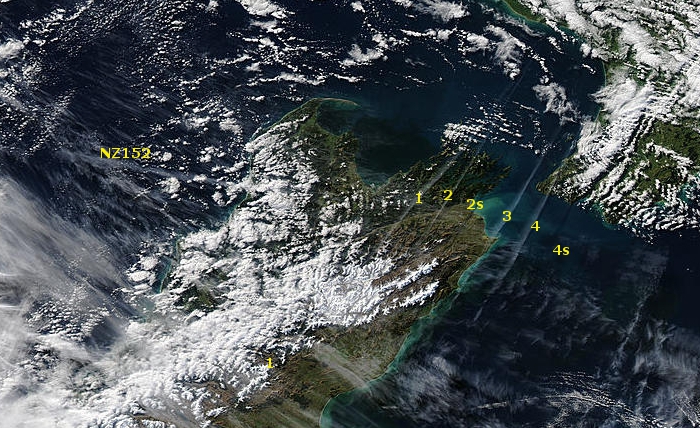 I took some photos of these contrails from the roof of the MetService building in Kelburn, Wellington at 2:45 pm Monday 19 July 2010, just 25 minutes after this MODIS image. Also, MetService’s web-cam at Christchurch Airport caught the southern end of the easternmost contrail (labelled 1 in the MODIS image) as it moved across Canterbury Plains. 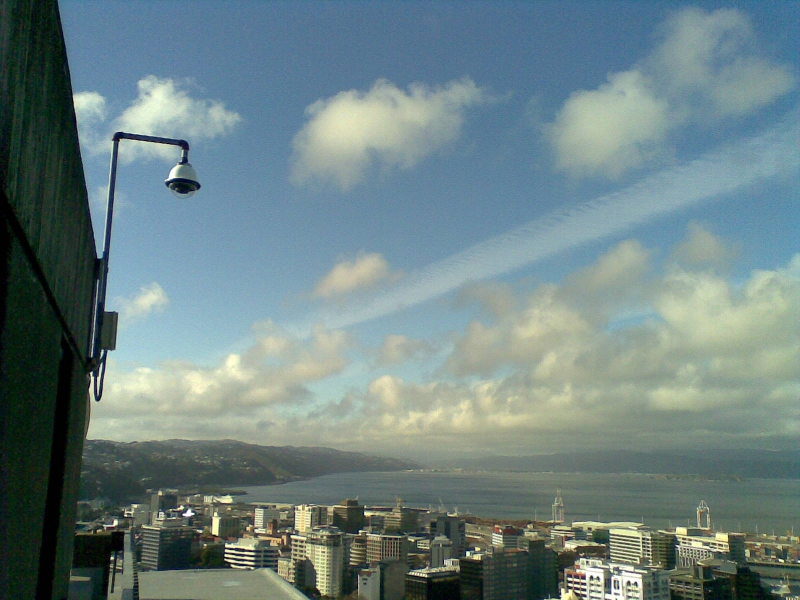 Two contrails over Wellington Harbour at 2:45 pm on Monday 19 July 2010. This view is towards the north.
One contrail (the eastern one on the right) is partly obscured behind the lower cumulus cloud. These two contrails are the eastern most ones in the satellite image. 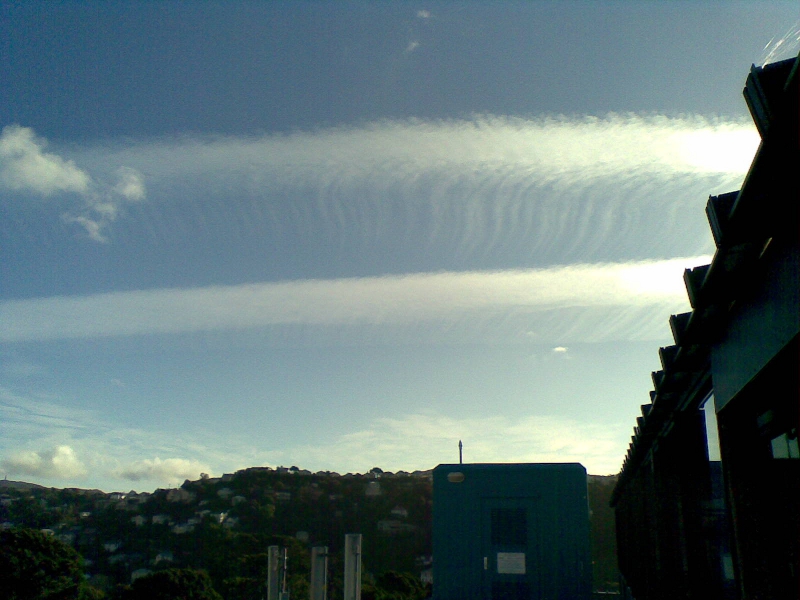 These two contrails are the western two in the satellite image. This photo was taken at 2:45 pm on Monday 19 July 2010.

Christchurch Airport web-cam photos looking northeast. This is an animation of images at 10 minute intervals from 2 pm to 4:40 pm.

Around Wellington, the wind at the level of the contrails was quite a strong westerly, which explains why the contrails moved quickly across the sky from west to east. The wind in the atmosphere was also increasing with height; this spreads the contrails out enough to make them visible in satellite images. These contrails could still be seen in a lower resolution infra-red satellite image at 5:00 pm when they were 230 km east of Wellington. In New Zealand, the long distance air routes are all more or less northeast - southwest. Thus, it is easy to see how several aircraft travelling these routes can create a set of parallel contrails. In Europe and North America the air routes are in all directions, and regular grid patterns of contrails are sometimes seen. Sometimes, the contrails in these grid patterns spread out to form a big sheet of high cloud: cirrus or cirrostratus. This was one of the best and most persistent contrail outbreaks I have observed for some time. Contrails are interesting to watch and sometimes, as with these, there are fascinating details and patterns in the ice clouds as they evolve. Keep watching.