When we head towards the Winter season, the days get shorter and we can expect temperatures to start to fall. Often in New Zealand, Autumn is a very transitional season, swinging from warm tropical air from the north to cold southerly air from the South Pole.

These swings from hot to cold are very noticable especially for the South Island and the lower North Island. With the drop in temperatures New Zealander's wake up to 'dressing-gown worthy' mornings, and as you sit there wrapped up warm with a cup of tea, have you ever wondered why we get these cold nights? And what different factors play a part in how cold the night will get?

Probably the most obvious mechanism, is your regular ambient temperature. Most people from the southern hemisphere, recognise that the word ‘southerly’ in a forecast means cooler weather. This is due to the simple fact that colder air lies at the poles, and if the wind is flowing from the poles it pushes (or advects) the colder air north. Hence for us in the southern hemisphere, a strong southerly generally equals cooler temperatures day or night. 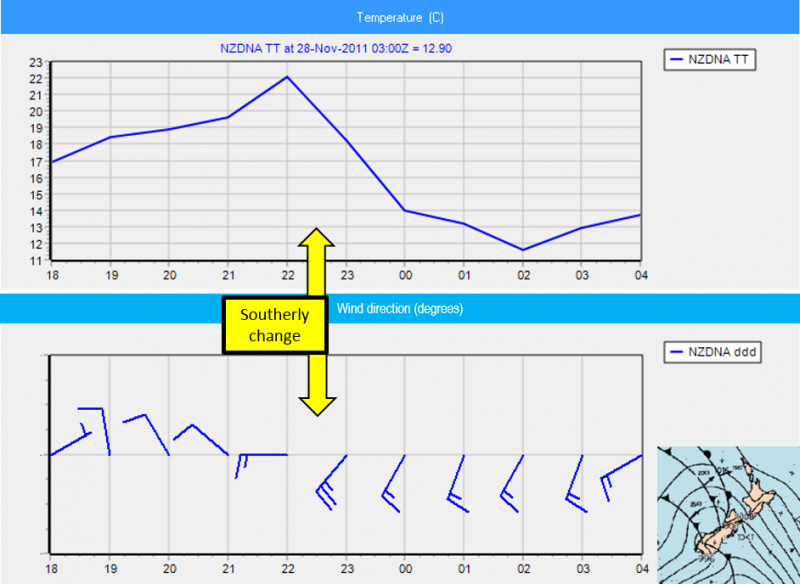 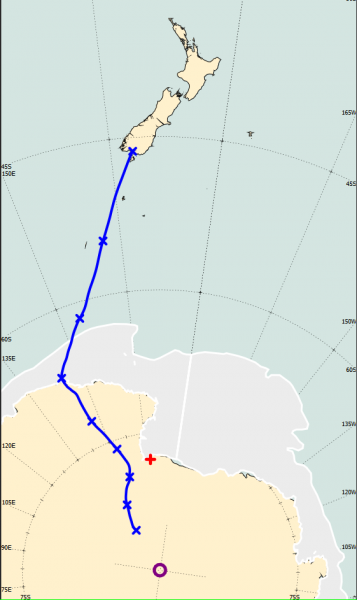 This image shows a trajectory of where an "air parcel" which arrives in New Zealand could start from (this is an actual case from May 2017 where Invercargill's maximum daytime temperature was 8C and overnight minimum was 1C. Many inland areas saw negative temperatures and even some snow in this event).

The cloud can have a large bearing on both night-time and daytime temperatures. We know that a cloudless sky during the day means more heating from the sun and warmer temperatures, what is it’s effect during the night? With the sun on the other side of the earth during the night, the only heat source is the earth itself. That means, heat radiates out of the earth cooling the ground surface, which, if it’s overcast gets absorbed by cloud and reradiated back – creating a blanket-like effect.

The difference in temperature can be great between a clear and overcast night. This phenomenon can be counterintuitive, as, after a screaming southerly (see paragraph above) depending on whether the cloud clears or not will determine whether the coldest night will be the one right after or the next clear night. Note surface conditions (i.e. desert, forest etc.) can affect the absorption of heat energy affecting ambient and especially ground temperatures.

This one is less changeable than the previous two; altitude (or height above sea level). As you rise above sea surface level ambient air temperatures inherently decrease according to how saturated the air is (it’s a thermodynamic thing). This decrease is between 10 degrees and 6 degrees Celsius by every kilometre you rise. This means, all things being equal, Taupo, sitting 400 metres above mean sea level will be about 4 degrees colder than a coastal city such as Napier on a dry day.

So, with this knowledge under your belt you can now understand why you may need to wear your slippers in the morning during the winter months (ignoring underfloor heating factors).