We think of Benjamin Franklin as American, but for the first seventy odd years of his life he thought of himself as British. In turn, the British thought him one of theirs and embraced Franklin’s ideas and inventions as British discoveries.

For example, on his first voyage to New Zealand Captain Cook carried one of Franklin’s lightning conductors. Caught in a thunderstorm in Batavia (Jakarta), the Endeavour was struck by lightning but unharmed while a Dutch ship nearby had its mainmast shattered.

On 18 May 1773, during his second voyage to New Zealand, Cook was sailing the Resolution towards Stephen’s Island when he met with six waterspouts. As the sky darkened with cloud threatening strong winds, he ordered all sails “clewed up” to lessen the risk of damage. Four waterspouts rose and spent themselves between the ship and the land, a fifth was out to sea, but the sixth passed about 50 metres away from the stern of the Resolution.

Cook was familiar with Franklin’s theories about waterspouts, in particular, Franklin’s speculation that a large gun fired into one would disrupt it. Franklin, on horseback and armed with two pistols, had once chased a whirlwind down a country road in Virginia but it got away over a fence before he could shoot it. Cook endeavoured to try the experiment and ordered a cannon loaded and aimed but the waterspout had moved out of range by the time the gun was ready.

Franklin’s work on electricity won him international renown. The experiments he proposed, in a paper published by The Royal Society, proved that lightning was a form of electricity. This had long been the subject of speculation. Newton, for example, had described a spark jumping between the tip of a needle and a piece of amber rubbed with silk “The flame putteth me in mind of sheet lightning on a small – how very small – scale.” 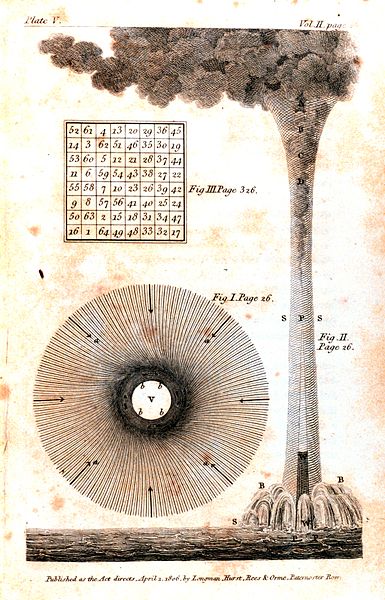 Franklin proposed building a sentry box on a tall tower with a 10 metre iron rod connected to an electrical stand. A person holding a grounded wire by insulated handles could draw sparks from the iron rod to the wire when an approaching thunderstorm charged the rod.

While Franklin waited for a tall tower to be built in Philadelphia he hit upon the idea of flying a kite into a storm and drawing sparks from a key attached to the kite string. By the time he successfully carried this out in June 1752 his original experiment had twice been successfully conducted in France, although news of this had not yet reached America.

Franklin was the first to use the terms positive and negative to describe electric charge. He also came up with the concepts of batteries and capacitors and the distinction between insulators and conductors.

Aside from explaining the nature of lightning, Franklin made other contributions to meteorology.He explained the paradox that an easterly storm could affect Philadelphia before it reached Boston, even though Boston lay further east. The answer was that the storm was a large whirling vortex of wind that moved eastwards across the land.

He correctly deduced from summertime hail that there must be a high layer in the atmosphere where temperatures were always as cold as winter. He astutely blamed volcanic eruptions in Iceland for “dry fog” experienced throughout the northern hemisphere in 1784 that brought an extremely cold winter.

Franklin had time to indulge in scientific speculations, as well as enter politics, because he had been so successful as a printer he was able to retire at forty-two. Among his popular productions was Poor Richard’s Almanack which contained information on tides, moon cycles, weather, sundry advice and pithy sayings such as “A countryman between two lawyers is like a fish between two cats.”

Borrowing a trick from Jonathon Swift, Franklin predicted the death of a rival. When the due date arrived, he pronounced the man dead. When his rival claimed to be still alive, Franklin dismissed the protests as a cruel hoax perpetrated by others trying to make money from the dead man’s name.

Franklin’s weather forecasts a year ahead were also tongue in cheek – “Ignorant men wonder how we astrologers fortell the weather so exactly…Alas! ‘tis easy as pissing abed. For instance: the stargazer peeps at the heavens through a long glass; he sees perhaps Taurus, or the great bull, in a mighty chase, stamping on the floor of his house, swinging his tail about …Distance being considered, and time allowed for all this to come down, there you have wind and thunder.”

Franklin’s scientific work made him the most famous American in Britain and Europe. He was the first person outside Britain to receive the Royal Society’s Coply medal. Hailed by the German philosopher Immanuel Kant as the “modern Prometheus”, Franklin was elected a foreign associate of the French Acadamy of Sciences and received honory degrees from numerous universities.

In politics he played a vital role in the decades before the American Revolution. Once war broke out, he helped write the Declaration of Independence then was given the crucial task of handling the French alliance. Hailed as the “electrical ambassador” in France, the French statesman Turgot said of Franklin “He snatched lightning from heaven and the sceptre from tyrants.” One portrait showed Franklin enthroned in the sky surrounded by winged deities with a lightning bolt behind him. Louis XVI, although helping the American cause, had a Sevres chamber pot made with Franklin’s portrait inside as a gift for one of Franklin’s admirers.

By the time Britain was defeated and a treaty negotiated, Franklin was eighty. Sailing home, he found time to measure the depth of the Gulf Stream using a corked bottle on a thirty-five fathom line. The pressure at depth forced the cork into the bottle followed by deep water. Pulled back to the surface, the water temperature was 12 F colder than the surface, proving that the Gulf Stream was a relatively shallow layer of warm water.

Back on land, Franklin returned to politics and helped revise the Constitution, before dying aged 83, one of the most remarkable statesmen-scientists the world has seen.