ASPERATUS? Clouds: Their changing shapes often occur over a time-scale and space-scale that we humans can not always fully appreciate unless we use time-lapse photography. In the international cloud naming scheme used to describe and identify clouds, there are ten basic characteristic cloud FORMS or TYPES or genera (nouns):  Cirrus, Cirrostratus, Cirrocumulus, Altostratus, Altocumulus, Nimbostratus, Stratocumulus, Stratus, Cumulus, and Cumulonimbus.

There has recently been a call from the Cloud Appreciation Society of the United Kingdom to ask The Royal Meteorological Society to apply to the World Meteorological Organization to officially add a new variety or species of cloud to the international scheme.  The new word is "ASPERATUS", after the Latin word for rough, and is intended to be used as an adjective to describe those clouds whose underbellies look like the surface of choppy sea. This story was covered by the Daily Mail in the UK. 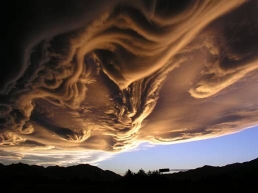 Photo credit to Bill Slater, taken near Hanmer Springs on 2 March 2005 and winner of the Met Society Photo competition in , shows an example of what ASPERATUS implies.

Bill explains "It was a fine day and we first noticed some round disc like clouds at fairly high altitude. We commented that they were like flying saucers. Then as we reached Hanmer Springs we started to see these swirls and dangling clouds, looking back towards the Lewis Pass... no rain ever fell."

"Asperatus" clouds form when there are two (or more) layers of air of differing density, one sitting on the other.  The cooler and higher layer is cloudy and the other layer is clear.  The boundary between these layers may occasionally get knocked up, but will return downwards thanks to gravity and then may go further down but will return back up thanks to buoyancy.  This creates a wave-like surface along the cloud base, and we call these gravity waves because the returning force is gravity and buoyancy.

Yes, the waves on the surface of the sea are a good example of this process.

At first individual Altocumulus lenticularis clouds form,  but as a front approaches, upper-level moisture increases and middle and high clouds combine to produce an arch cloud comprising Altocumulus, Altostratus, and Cirrostratus.  This arch cloud displays a very sharp edge near the mountains and often there is an arch of clear sky immediately downstream of the mountain divide.

We can cope with the current naming scheme and use Altocumulus lenticularis to describe the NW arch clouds, but it would also be useful to have the extra variety or species word "ASPERATUS" especially when there are undulations in the cloud base. 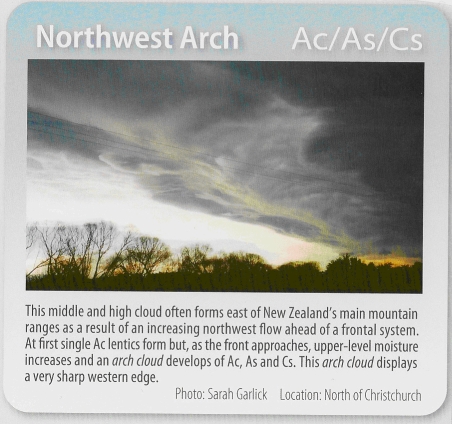 The MetService cloud poster already has a special photo devoted to the NW arch cloud.  At present it is just classified as "Northwest Arch    Ac/As/Cs", but if the word "ASPERATUS" is officially accepted then we are ready and waiting.