The shortest day of the year....
but the coldest days still to come.

The WInter Solstice (June 22nd) is usually the longest night of the year, followed by the shortest day.

The time from sunrise to sunset is shorter, by a few seconds, than the surrounding days.

The winter Solstice, or that point in time at which (from our viewpoint) the sun was furthermost to the north, occurred at 5:16am New Zealand local time.

Click here to see a previous MetService blog that has a graph of the sun's changing position from our viewpoint during the year.

In Coordinated Universal  Time (UTC), this winter solstice was at 17:16 (hours: minutes) on 21 June.  Some calendars printed overseas have June 21 marked as the shortest day, but for us it is  22nd June.

The actual date of the solstice varies a little from year to year, and  wanders towards the 22nd as we  approach a leap year.  After the leap year adjustment is made and the solstice and equinox are corrected back toward their natural date, the 21st.

There is an old saying that goes something like this: “when the days start to get longer, the cold gets stronger”.  To help appreciate what that means, look at the past data page for a site near you from our ‘Towns and Cities’ or ‘Rural’ page.    Auckland is shown below as an example: 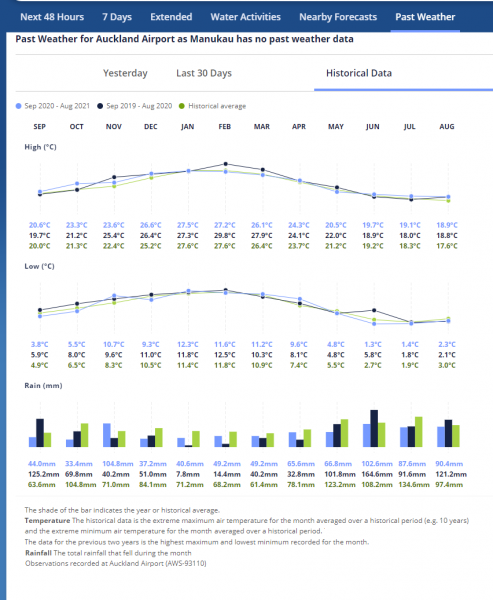 On our website you can read individual data points by using the ‘mouse-over’ option. Notice how the long-term average of the minimum temperature for Auckland,computed monthly, reaches its lowest value in July, while the long-term average of the maximum temperature , computed monthly, reaches its lowest of in August.  The coldest sea temperatures of the year in Auckland are just below 14C and usually occur in late August.  For Auckland, the warmest air temperatures usually occur on or within a few days of Waitangi Day and the warmest sea temperatures follow around ten days later. In New Zealand, the coldest air temperatures of the year occur between mid-July and early August, around 3 to 6 weeks after the solstice.   This seasonal lag varies around the country, and is longer in the north than in the south.  The lag reflects the time required for the sun to warm the earth's surface.

In New Zealand, because of the strong effect of ocean temperature on our climate, the lag is strongly tied to the response of the oceans to changing sunlight.  Click here to read more. However, this lag is also seen in places with a continental climate - i.e. not directly affected by sea surface temperatures - where it reflects the time it takes to warm up the ground.