In my previous blog post I wrote about how much the winds high in the sky differ from the winds that we are accustomed to nearer sea level. The winds aloft are usually much stronger than those near the earth's surface, this difference being  especially true in New Zealand. Another difference (which I mentioned in the last blog post) is that the wind we experience every day is more variable, suggesting that the wind aloft is more unchanging. This is true, with westerlies being most common at altitude over all parts of the country.

This difference in wind is apparent even between sea level and just a few hundred metres up. For example, consider Mount Kaukau, a hill standing about 500 metres above Wellington. Mount Kaukau has a wind-speed recorder (called an anemometer) that consistently reports much stronger sustained winds than at Wellington airport near sea-level. An interesting side-effect of this is that the wind at the airport is, paradoxically, more gusty! 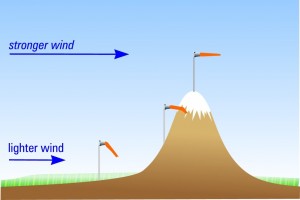 Typical variation of wind with height. If the wind is strong, air flows through the orange "sock" making it nearly horizontal.

When I worked in Manawatu a pilot once told me that they thought of the anemometer on Mount Kaukau as "the wind-sock of the lower North Island". There is a lot of meaning and understanding behind this statement. The wind aloft is more predictable than the wind nearer sea level. This, together with the interaction between the winds at different levels, suggests that the upper wind can be used as a predictor of what the wind is (or will be) like lower down.

An astute pilot can make valid inferences about differences in local weather in the lower North Island based on subtle changes in wind direction at the "wind-sock of the lower NI"; Mount Kaukau winds are also a good guide to winds in Cook Strait. Such inferences are especially useful in New Zealand where the interaction between wind flow and topography has a really big effect on the weather.

You can make your own deductions about the variations in wind by viewing our ski field page over the coming season. Compare the winds at the ski fields with those at lower-lying nearby stations (by selecting a North or South Island station). We may next want to ask: why is it that the wind is so different high up in the sky? I will discuss that issue in a later post.