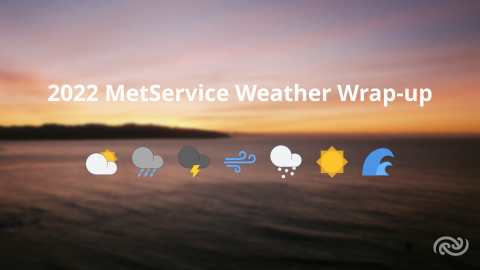 With 2022 coming to an end, we thought it’d be timely to look back at the year of weather. Two words come to mind, wet and warm. Low pressure systems from the northern Tasman Sea were frequent around Aotearoa and brought a rise in both the temperature and the amount of rain that fell. Read on to find out more about MetService’s notable weather of 2022.

Severe Weather
Firstly, we had 53 Severe Weather Events this year and issued 182 Severe Weather Warnings, that is about an average amount, but we had several events which were far from average. We introduced our colour coded warning system in May 2019 and have issued eight Red Warnings since, four of those were this year.
The beginning of February saw incredibly heavy rain impact Westland, Buller, and Taranaki. 500-800mm of rain fell in 72 hours around parts of Westland. Evacuations were required in Buller and a state of emergency was declared. When the rain made it to Taranaki it was very intense with a station near Cape Egmont receiving a month’s worth of rain in just four hours.
In the last week of March, the flooding rain took aim at Gisborne with extensive damage sustained across the region including the Tokomaru Bay bridge being washed out, isolating communities. Gisborne Airport recorded a month’s worth of rain in seven hours and parts of the region ticked up 200-300mm over the event. A state of emergency was declared for the Tairawhiti region.
A few weeks later Cyclone Fili approached New Zealand and we issued another Red Warning for Gisborne. While this event may not have been a Red Warning on its own – for a region in recovery mode we knew significant impacts would come around more readily. 150-200mm of rain fell in 24 hours and there were power outages, toppled trees, flooding, and more communities isolated.
The middle of August saw the extreme rain move back west, with another flooding event for Westland, Buller, and Nelson. Some stations in the ranges of Tasman recorded over 1,000mm of rain. A state of emergency was declared in Nelson, Westland, and Marlborough. Our station at Nelson Airport ticked up four months of rain in three days and August came in as the second wettest month in 80 years of records at that station.

High and dry to start
Those were the four Red Warnings but, the year started out on a much more settled note. High pressure was situated around our shores in January and prolonged dry conditions spread from Auckland to Whanganui. Our Whanganui station received 0.2mm, making it the driest month in over 50 years of records. Our New Plymouth Airport station had 9.4mm, the driest January there since records began in 1944.

Flip the script February
With a dry January in the bag, Mother Nature decided we needed a bit of rain. Cyclone Dovi arrived from the north and brought record-breaking rainfall to Taupō with our station clocking up 118.8mm in a day, the wettest 9am-9am there in almost 50 years of records. New Plymouth Airport recorded their 4th wettest day. The rain made it to the South Island also with Westport Airport setting its 1st and 5th wettest days but also smashing its record wettest month in almost 80 years. 609.8mm up from 453.4mm from April 1957.
It wasn’t just rain records that fell in February, our tropical visitors also brought some steamy temperatures. Whanganui Airport got up to 32.7°C on the 10th of Feb setting a new maximum temperature for that station in the 44 years of records. The heat remained overnight from Northland to Queenstown Lakes with Whangārei Airport only dropping to 23.8°C overnight, setting a new record there. Kerikeri, Auckland, Rotorua, Ashburton, Wanaka and Queenstown Airports all broke their overnight records.

Winter thunderstorms
Getting closer to the middle of the year the temperatures dropped off, but we saw an increase in thunderstorm activity. A tornado ripped through parts of Levin on the 20th of May and other tornadic systems were seen around southwestern parts of the North Island. Thunderstorms were frequent around that time and into June with the lightning detection network we use picking up over 111,000 strikes in the seven days up to the 13th of June.
MetService meteorologist Lewis Ferris says, “I can’t remember being woken by lightning so much in the last five years living in Wellington.”

A winter for the record books
Moving on into July and we were back into record rainfall territory. Our station at Christchurch Airport hasn’t exceeded 200mm of rain in a month since it was installed in 1943. This July clocked up 309.8mm – five times its average July rainfall. Blenheim and Timaru also had their record wettest month.
After the August Red Warning it may come as no surprise that our station at Nelson Airport decimated its previous winter record of 570mm set in 1970. They ticked up 701mm and exceeded their winter average rainfall in four consecutive days in August alone (17th – 20th). Other central areas also broke winter records: Blenheim Airport, Wellington Airport, Paraparaumu Airport, Levin and our station in Kelburn (which has observations back to 1928). Moving north; Palmerston North, New Plymouth, Taupō and Rotorua airports all hit their wettest winters on record. It wasn’t just northern regions of the South Island that were unusually wet; Christchurch, Timaru, Wanaka, and Hokitika airports all set new winter records, with Hokitika recording a whopping 1142mm – more than 400mm above their winter average.
Ok, so it was a wet winter, that’s a step towards making a good snow season right? Well, yes that was true, just not everywhere. A lot of our big rain makers came from the north this winter. This means they brought heaps of moisture which is good for snow making but they also brought warmer temperatures which was bad for the skifields that it hung around. This is exactly what happened for the North Island fields, they got all the moisture but also the warm air. The South Island fields were lucky enough to get some good southerly outbreaks meeting the warm air from the north so managed to receive a few decent dumps of snow.
Staying on the snow tune, we had an Antarctic outbreak early in October which saw snow settle on beaches from Stewart Island to Christchurch with flakes captured by a few of our meteorologists here in Wellington.

Northern rain November
November was another unsettled month with more low pressure systems out of the northern Tasman Sea providing us with humid conditions and plenty of rain. Whangārei airport recorded 367.0mm of rain, adding over 100mm to the previous wettest November there in almost 80 years of records.
December has seen us issue Severe Thunderstorm Watches almost every other day with plenty of downpours popping up from Northland to Southland. Over 140,000 strikes have been detected on the network this December.

What about 2022 as a whole?
Our station here in Wellington looks to have had its wettest year since records began in 1928. Our stations in Taupō and Blenheim also appear to have made the mark. Taking the sum of rainfall across our stations in the six main centres also puts 2022 as the wettest in the last 30 years. Hamilton, Tauranga, Wellington, and Christchurch were the wettest in the last 30 years, Auckland came in fifth, but Dunedin bucked the trend and was below average.
How about the temperatures? The average mean temperature across the six main centres also came in as the warmest of the last 30 years. 2022 was the warmest over the last 30 years for our stations in Auckland, Hamilton, Tauranga, and Wellington. Christchurch and Dunedin were a wee way down the pack but still above their 30-year average.
Maybe you’ve been paying attention to the weather this year and none of that comes as a surprise. Well, we’ve kept one card up our sleeve. Our station at Milford Sound Airport came in below average rainfall! Maybe the one instance where we can say a place ‘only’ recorded around 5,300mm.

If there's one thing we can guarantee for 2023 is that New Zealand will see some interesting weather and the team here at MetService will be with you 24 hours a day, seven days a week, 365 days of the year keeping you updated with all the latest information and forecasts, so you can make informed decisions and remain safe.