The full pollen season in New Zealand is approximately 34 weeks long and varies in its timings each year - It begins in July or August with the  Pinus season and continues into August/September with deciduous trees like oaks, elm, birches and other deciduous trees. Other early pollen hazards here are macrocarpa (Cupressus macrocarpa -pollen of which has been shown to sensitise up to 30% of asthma clinic attendees in Melbourne) and hazelnut (Corylus) a potent allergenic pollen which may have an occupational implication here as the emerging horticultural industry grows. The major pollen hazard, the grasses, dominate in October through to and after Christmas and finally olive trees, privets and chenopod/amaranth/composite weeds contribute to pollen load in January and February. Fungal spores are produced into the air in February and March and contribute to ‘hayfever’ then. In summary, Spring pollens include pine, wattle, alder, poplar, oak, ash, birch and early grasses.

Summer pollen includes grasses, weeds such as plantains, nettles and sorrels as well as trees such as olive trees and privet.

Autumn has late grasses, and as vegetation starts to decompose, fungal spores.

WHICH PLANTS CAUSE POLLEN ALLERGY?

Wind pollinated plants dominate the allergenic (allergy-causing) pollens, because of their massive production into the air. Pollination for these plants is by the chancy business of air transport and deposition. They are often overlooked because their flowers are small often with no petals at all. Grass flowers and tree catkins are examples. 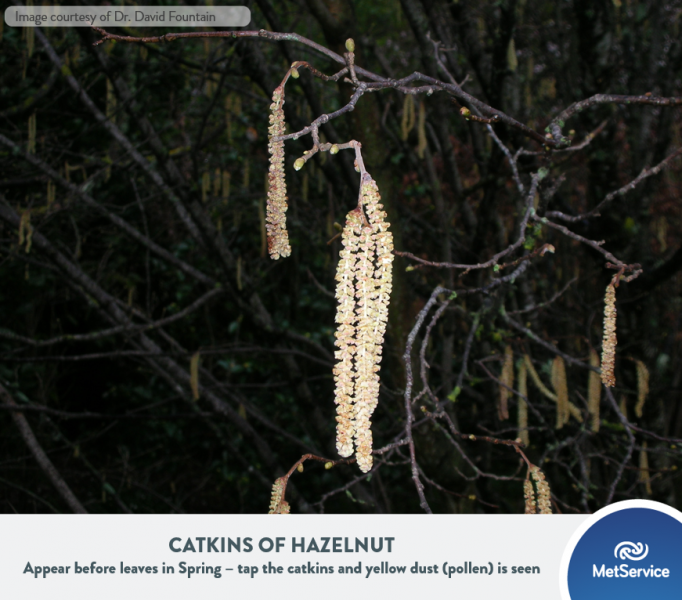 AM I ALLERGIC TO POLLEN?

You will need to check with a doctor – a simple skin prick test using allergen preparations from the different pollen types will show whether you are sensitised to pollens in New Zealand. If you have seasonal runny nose, sneezing and watering eyes you may be one of the 20% of kiwis who react to pollen in the air. Grasses are the major pollen culprit in New Zealand and peak before and around Xmas. Allergy to lilies, daisies and other perfumed flowers is due to volatile organic compounds (scents) rather than proteins.

Pollens are allergenic because the air-borne grains release proteins upon contact with water which may cause an allergic reaction.The following table lists common NZ allergenic plants in a rough order of symptom severity and prevalence. The column ‘major allergen’ refers to the main protein from each which is the cause of the allergy.

**allergen nomenclature uses the first three letters of the genus from which the allergen comes (eg Lol for Lolium) followed by an abbreviation of the species name (p for perenne) and a number designating the order in which they were identified. The same number is also used to designate homologous allergens of related species.

Pollen is shed from flowering plants as microscopic grains 15 to 50 micrometres across.  Only when they are shed in large numbers are they visible as dust or as a cloud in the air. 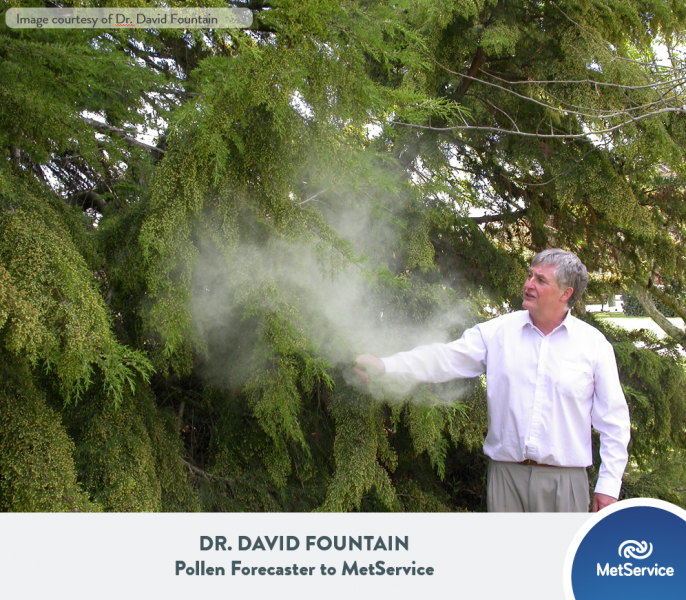 Pollen grains comprise two or three cells derived from a reduction division (meiosis) in anther pollen mother cells, followed by mitosis and a unique wall development process which encapsulates the grains in a sculptured resistant shell known as the exine. 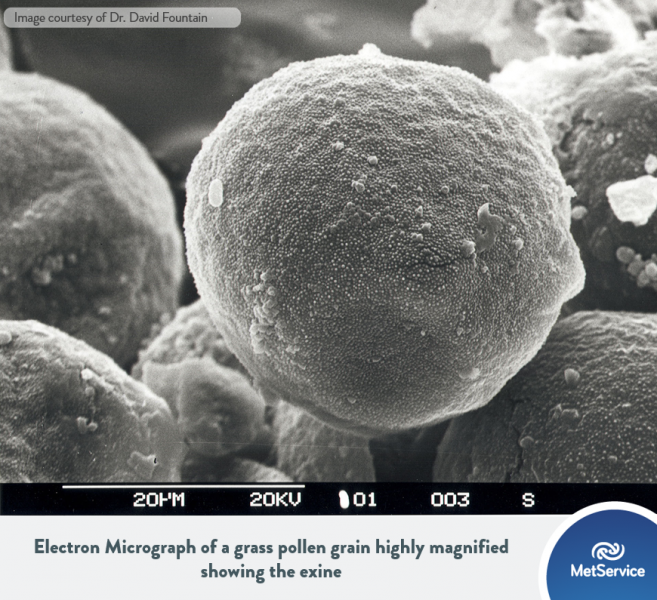 This is why pollen grains are important in archaeological sites, allowing dating, and flora determination of long ago times. Pollen grains from wind-dispersed plants are very light and buoyant and can travel long distances. When they land on the damp surface of the pistil of the flower, they take up water, release recognition proteins, and germinate rather like a seed does. It is these proteins flowing out of the wetted pollen grain that cause allergy in susceptible people. In the plant world, a microscopic fragile pollen tube grows out, and in the female organs of the flower, carries the male contribution to make a seed.

HOW FAR DOES POLLEN TRAVEL?

From a source plant, pollen streams out in the air flow just like a smoke plume. For multiple sources such as a pine plantation or fields of flowering grass, pollen may be produced as a mass blanket of particles in the air. Pine pollen in New Zealand can often be seen as yellow clouds over trees and as yellow drifts or scum on water. 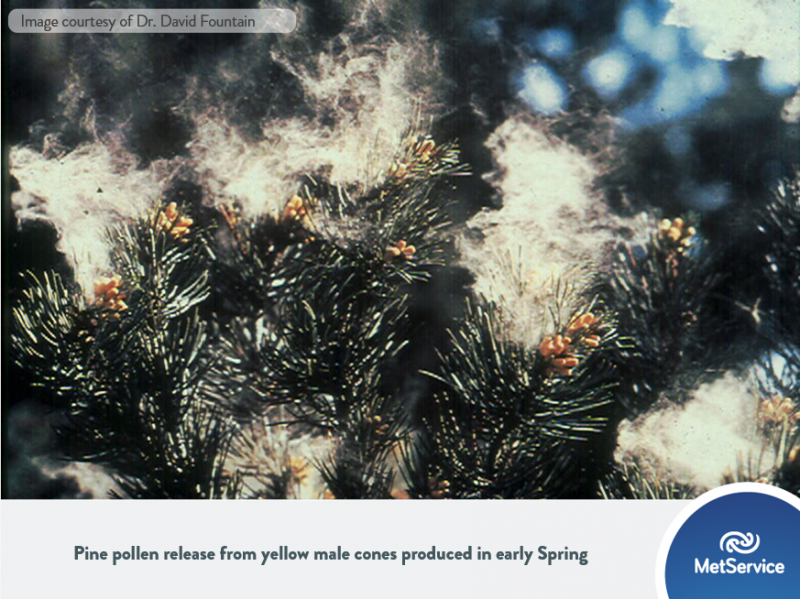 Long distance transport of pollen is possible, bringing grass pollen down country, for example, in northerly conditions. Weather and wind direction affect daily levels in moving local concentrations about in the air; and finally, higher altitude areas lag behind coastal regions at least in terms of pollen production. Many grasses release their pollen in the very early morning and levels may be high then and fall later in the day depending on air movement. Little air movement means that most pollen is deposited close to the parent plant. The greatest recorded spread is 4500 km from a source. Long distance dispersal of pollen can account for the appearance of inhalant allergy in populations exposed to air arriving from very distant parts. Such a phenomenon accounts for the clinical arrival of birch pollen allergy and asthma symptoms in Scandinavia long before birch flowers there. The pollen arrives from as far south as Italy where flowering occurs much earlier.

POLLEN  ALLERGY IN OTHER COUNTRIES

Some countries are particularly known for allergenic plants in addition to grasses: