The weather pattern was almost perfect for the 2009 HSBC Coastal Classic Yacht race from Auckland to Russell. 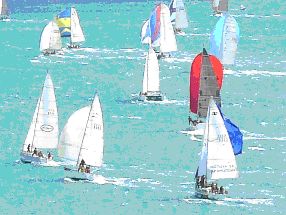 Part of the 2009 Coastal Classic fleet

A fleet of 205 boats set off from Devonport at 10am on the Friday before Labour weekend in prime conditions, with a 20 knot southwest breeze through Rangitoto channel and a steady 15 to 20 knot southwest wind in the Hauraki Gulf.

A new overall race record was set by Neville Crichton on keelboat Alpha Romeo, smashing the  seven hour barrier and completing the race in 6 hours and 43 minutes  (an average speed of 17.9 knots for this 119 nautical mile race), replacing the 7hr 20min multihull record set by Split Enz in 1998, and keelboat Zana’s 8hr 29min record set in 2005.

'We had a fantastic ride all the way', Crichton told Montgomery. 'We hardly went under 18kts, it was a dream run.'

'We cleared the field very early in the race. We carried spinnaker all the way to Kawau (26nm north if Auckland) and from there were two sail reaching all the way.' 'From Tutukaka onwards we had 25kts, and a beam reach which is just beautiful sailing. It probably suited multihulls better than us, but we were able to stretch our legs, at the start, and they never got back at us at us.'  'From Cape Brett to Russell it was right on the nose'

The weather pattern that allowed these records to tumble involved the combination of a cold front moving off and an anticyclone approaching from the Tasman Sea.   The map at 0000 UTC 23 Oct 2009 below (1pm Friday 23 Oct New Zealand daylight time) shows these features a few hours after the start of the race. 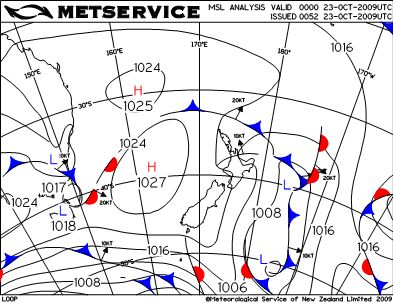 That black line drawn across northern Waikato and the Bay of Plenty region marks a trough line. This trough formed in the lee (or downwind) side of the North Island as the air pressure built on the windward side.  In this case the pressure rose faster over Hawke's Bay than around Auckland, and consequently the isobars were twisted into a lee trough.  Sometimes, when conditions are conducive aloft, a lee trough deepens as it is displaced northwards,  and the result is a surge of easterly wind across the Bay of Plenty that is concentrated by the gap between the Coromandel Peninsula and Great Barrier Island, so that it moves across the Hauraki Gulf and arrives in Auckland with a wet flourish.

The weather map for 1200UTC on 23 Oct 2009 (1am Saturday New Zealand daylight time) shows that, in this event,  the southeast wind change remained mostly offshore. 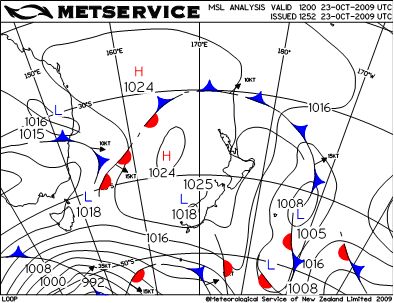 Look closer at the 1020 hPa isobar and you can see that at 1am/1200UTC it was still over the Auckland area and moving eastwards.

At the briefing for this year’s Coastal Classic, MetService Weather Ambassador Bob McDavitt was able to interpret the weather information available and provide the helpful racing tip that if a vessel observed that their barometer was rising above 1020 hPa, then they should prepare for a southeast wind change.

In the animated map of wind observations below, add 13 hours to convert the timestamp to New Zealand daylight time.  The plotted winds flow from the feathered end to the pointed end; each barb is worth ten knots, and half a barb is five knots.  The observations highlighted in red are from Bean Rock in the Auckland harbour entrance and from Mokohinau Island, to the north of Little Barrier Island.  Mokohinau’s pressure is also plotted in code. The numbers given are the last three numbers of the pressure in tenths of hPa, with the leading  numbers deleted:  thus, 173 at the start of the loop with timestamp 20:30 translates to a pressure of 1017.3 hPa at 9:30am Friday (half an hour before race start). 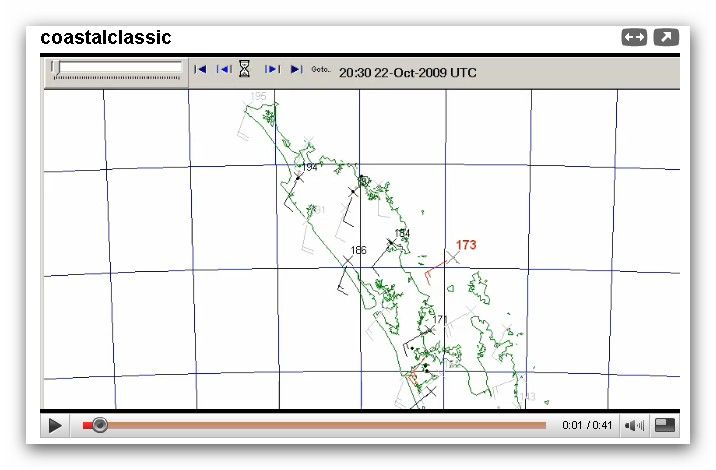 Note how the pressure at Mokohinau rose above 1020 hPa briefly between 11pm Friday night, and 1am on Saturday.  Winds turned southeast to easterly along the Coromandel coast and through Colville Channel from 1am until dawn, showing that Bob’s race tip worked OK – where the pressure got above 1020 hPa there was a southeast change.

The southeasterly winds along the coast near noon on Saturday were more likely sea breezes rather than remnants of the easterly surge.

If this easterly surge had been strong enough to make it to the Bay of Islands, and if it did so at the right time, then Alpha Romeo would not have had those head winds in the final stretch and could have completed a quicker time.

This is a good example of how sailors can use a barometer to check that the weather is unfolding in the real world as forecast by the computers.