MetService’s Auckland office is in Westhaven, and often I can be seen at lunchtime wandering around Victoria Park.  Much to my delight yesterday I came across some daffodils blooming outside one of Auckland’s oldest pubs (photo). 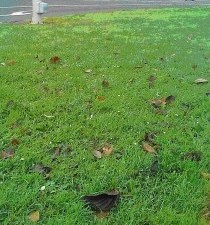 And near the flyover  some white lawn daisies are already showing themselves.

These are wonderful signs that warmer days are coming.  But not quite yet! Late July to early August is, on average, the depths of winter in New Zealand.   It is the period with the coldest days- the season for curling. Last night, Basil, one of my sailing buddies, commented on how he had a wonderful time in the squadron race last Saturday.  “What happened to that harbour gale warning?” he asked me.  I know that many fellow Aucklanders may also be interested in the answer, so here goes: 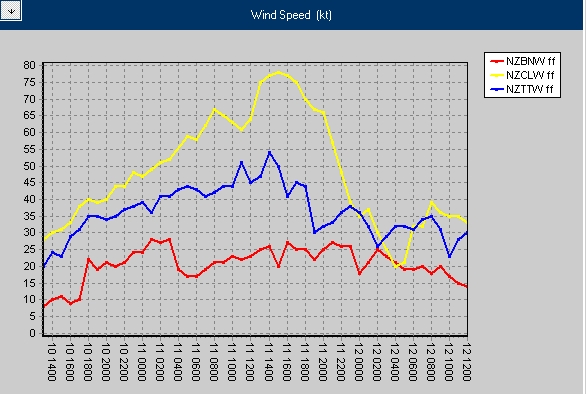 The above graph shows the wind speed average as measured in knots at three of the Coastguard Nowcasting stations around the Hauraki Gulf (maintained by MetService).  The time stamps are in UTC, so 11 0000 translates to noon Saturday, and 12 0000 is noon Sunday.

Channel Island (yellow) increased to storm force (over 47 knots) by noon on Saturday and Tiritiri (blue) to gale force, as correctly predicted in the MetService recreational marine forecast .

Bean Rock at the harbour entrance only increased to 25 knots (strong) and for much of the time was less than that.

Why so?  Friction is part of the explanation—wind can blow smoothly over the sea but when it blows over land the extra friction can knock around a third off the average speed.  MetService refers to wind speed in its land forecasts in km/hrand for marine areas in knots – this way people can tell that they have the right forecast for land or sea.

Another factor is air density. The day started with a buffer zone of cold dense air hugging the ground over Auckland.  The incoming gale was coming from the southeast, and blew over the Coromandels and then over the top of this buffer zone, unable to dislodge it.  The gale blew over the city, and for a brief time it dipped down to touch the Skytower, but it never dropped to sea level.  In this case the gale couldn’t dislodge the antecedent cold air.   This is rare, and it is more reasonable to assume the gale would get to sea-level rather than not, hence our forecasts.

MetService checks all its Auckland marine forecasts and we have a monthly average accuracy of 94%.  OK, this one didn’t work out and we will mark it as wrong.  In this case the gale didn’t get to sea level.   Please don’t assume that this happens often.

For example: check the following graphs: 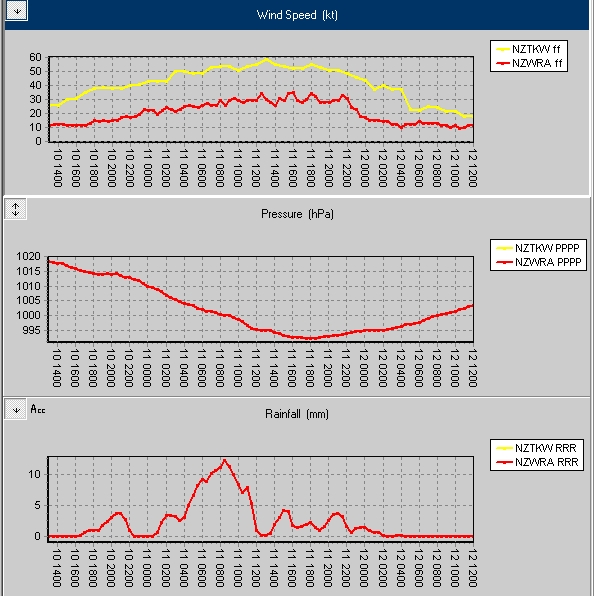 These show what happened at Whangarei on the same weekend. The coastal wind, as measured at Tutukaka (in yellow), rose to storm force on  Saturday afternoon, peaked  near midnight, and eased below storm force late Sunday morning, all as forecast, and with similar timing and intensity to what was happening about the outer Hauraki Gulf.

In this case there was no mountain range upstream from Whangarei to help disrupt the wind, and a gale was able to touch down into the city.  The winds at the airport (in red) were knocked back a third by friction (as per normal) but still reached gale force.  That was consistent with the damage reports around the area, including fallen trees and flying branches taking out powerlines.

I’ve also included the barometer and rain readings from Whangarei.  Note the close but not-quite-mirror link between pressure and wind speed.  This is typical for a low like this,  so if you have a barometer you can use it, in cases like this, as a rough wind speed forecaster.  Also note the peak in the rain occurred as the low was still approaching and eased off before the barometer “bottomed out”.  This is also fairly typical, but each low-pressure system is slightly different in this regard.

I find it fascinating that there is so much pattern in our weather, and I find it frustrating when, sometimes, chaotically, one of them behaves slightly differently, as in this case producing wayward winds for Auckland.