A tropical depression, identified as TD03F, is gradually deepening near Samoa and could be upgraded to a tropical cyclone later today. You can see the location of TD03F at 11am 28 November 2015 in the infrared satellite image below. 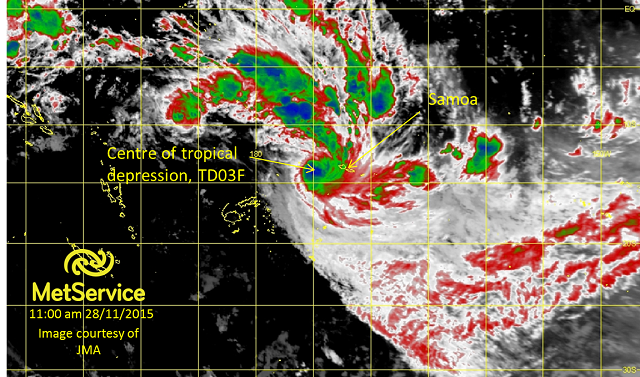 The centre of TD03F was located 240km to the west of Samoa at 7am this morning, with a central pressure of 997hPa. The tropical depression is gradually deepening as it slowly tracks southeast.

Forecast path of TD03F near Samoa produced by the Fiji Met Service in Nadi. The path shown above is the Nadi's best estimate of the cyclone's future movement and intensity. There is always some uncertainty associated with tropical cyclone forecasting and the grey zone indicates the range of likely tracks. More details can be found here: http://www.met.gov.fj/aifs_prods/65661.html

MetService will continue to monitor the progression of TD03F with our colleagues at the Fiji Met Service.