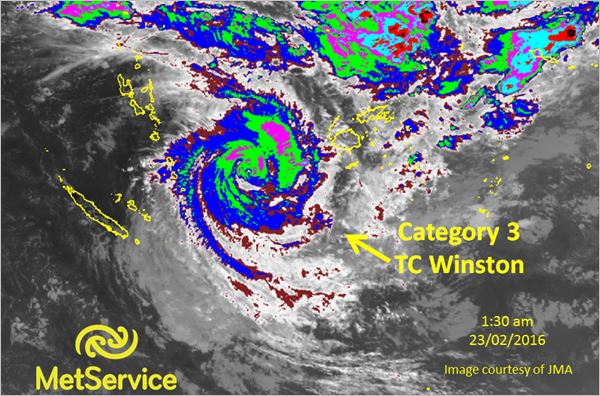 Tropical Cyclone Winston movement has slowed in the last 24 hours. It was located near 18.7S 172.6E lying between Fiji, Vanuatu today (Tuesday 23rd February). The central pressure of the cyclone was estimated to be 960hPa, making it a Category 3 cyclone, and it is now slowed down and is moving in a southerly direction and 6km/h. Winds close to the centre of the cyclone were estimated to be a mean speed of  around 157km/h.

Tropical Cyclone (TC) Winston was named by RSMC Nadi at 1pm on February 11th, 12 days ago, located to the east of Vanuatu.  Since then, TC Winston has tracked southeast, then northeast, turning westward and moving over Fiji and now it is moving south. 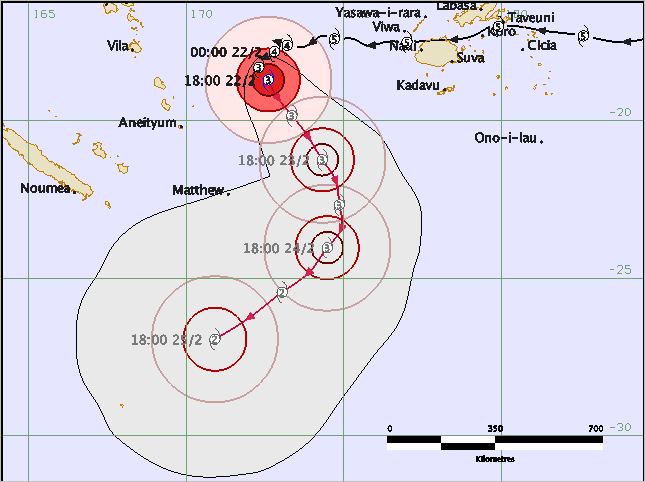 The tropical cyclone is expected to continue to move in a southeast direction before heading more southwest, with the expectation that it will be reclassified to a category 2 cyclone.

If/when Tropical Cyclone Winston moves over the latitude of 25 South, MetService New Zealand take over responsibility from Fiji Meteorological Service for issuing all official advisories and bulletins about TC Winston.

Tropical Cyclone (TC) “Winston”, currently category 3, is forecast to continue is a southerly direction today, and in the latter half of the week is expected to evolve into a deep mid-latitude low. You can find a MetService blog about this transition process at https://blog.metservice.com/TC-extra-tropical-transition. Looking at the latest global weather models, there is a risk that this low could impact central and northern New Zealand during the coming weekend, but there is also an equal chance it will move towards the Coral Sea.

“With tropical cyclones there is always some uncertainly associated with the tracks they will take,” explain Communications Meteorologist Lisa Murray, “ and the global weather models can change considerably from day to day until the track becomes stable (where the models are in more agreement).”  If this low does affect New Zealand, it has the potential to be a significant weather event, and could include impacts such as increased sea swell, heavy rain which could cause flooding as well as damaging winds.

Currently it is too early to give an accurate forecast for which regions of New Zealand are likely to be impacted (if any), but MetService meteorologists are monitoring this situation closely and will keep you updated. “What we can say is that it will not have the same impact and level of destruction as it did in Fiji”, said Lisa Murray, “Any severe weather effects for New Zealand caused by this deep low will be included in Severe Weather Warnings, Watches and Outlooks, as well as marine warnings and forecasts.”  MetService advises people to keep up to date with the latest forecasts at www.MetService.com.

The World Meteorological Organization (WMO) Tropical Cyclone Programme has been established to help emergency managers and the public prepare for tropical cyclones and minimise the loss of life and damage they can cause.  Under this programme, MetService is designated as the Wellington Tropical Cyclone Warning Centre (TCWC) and, together with Regional Specialised Meteorological Centre (RSMC) Nadi, is responsible for official warnings and advisories for tropical cyclones in the South Pacific.  As always, you can keep up to date with the latest forecasts and warnings at metservice.com as well as updates on the MetService Blog, Twitter and Facebook.