All times are in New Zealand local time.

Tropical Cyclone Winston was upgraded to a category five cyclone last night. This morning the centre tracked near to the Fiji Island of Vanua Balavu, where average wind speeds of 185km/h were recorded. Wind speeds even closer to the centre of the cyclone are estimated to average 220km/h, with momentary gusts likely to reach 315km/h. 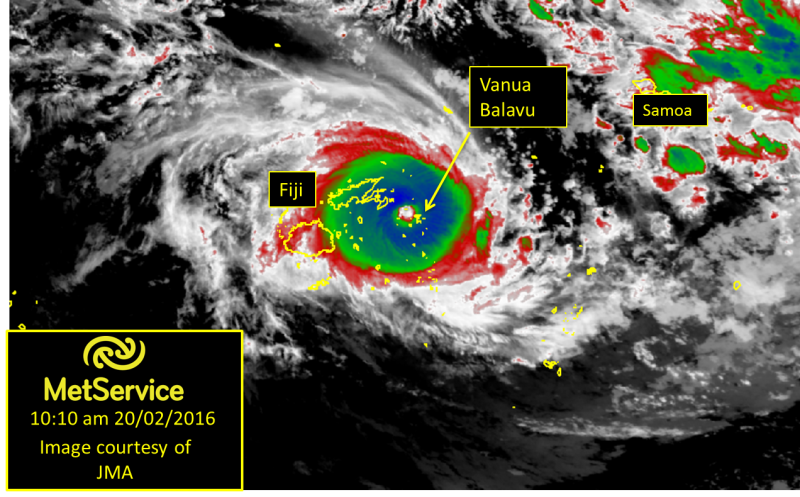 Over the next couple of days, the winds close to the center of TC Winston are forecast to weaken a touch, but still remaining around 200km/h. TC Winston is expected to move west-southwest over Fiji, before tracking south.

Range of possible future tracks for Severe TC Winston over the next 5 days, based on GEFS data.  Image from NOAA Earth System Research Laboratory.

There are currently no direct impacts expected for New Zealand in the next few days as TC Winston moves westward and then takes a more southerly track. Most global weather models expect the future track to move southwest and then northwest before weakening near the Coral Sea, but there are also some models who have the track moving further south. With tropical cyclones there is always some uncertainly associated with the tracks they will take, so we advise people in New Zealand and planning travel to the Pacific to keep up to date with the latest forecasts.  MetService meteorologists are monitoring this tropical cyclone closely and provide tropical updates daily via the Tropical Cyclone Activity page on metservice.com where you can also see hourly satellite imagery, as well as updates on the MetService Blog, Twiter and Facebook.

The World Meteorological Organization (WMO) Tropical Cyclone Programme has been established to help emergency managers and the public prepare for tropical cyclones and minimise the loss of life and damage they can cause.  Under this programme, MetService is designated as the Wellington Tropical Cyclone Warning Centre (TCWC) and, together with Regional Specialised Meteorological Centre (RSMC) Nadi , is responsible for official warnings and advisories for tropical cyclones in the South Pacific.  Any severe weather effects for New Zealand caused by tropical cyclones will be included in Severe Weather Warnings, Watches and Outlooks, as well as marine warnings and forecasts. http://metservice.com/warnings/severe-weather-warnings.  As always, you can keep up to date with the latest forecasts and warnings at metservice.com.