On Thursday 19 April 2012, New Zealand was completely surrounded by a very large High (or anticyclone). The air pressure at sea level was above 1030 hPa everywhere over New Zealand at midday on that day. Highest pressures were over inland Otago and Canterbury, peaking at 1039 hPa. Christchurch Airport was reporting 1038.2 hPa ... that's very high indeed. Here is a sequence of weather maps showing how the anticyclone developed over preceding days (click on the image to view animation). The first map is from midday on Thursday 12 April, and the time steps are six hours until the final map at midday on Thursday 19 April. It's interesting how the initial anticyclone moved onto the Tasman Sea with a central pressure around 1029 to 1030 hPa, then another system came up from the Tasmania region and joined the initial system, reinforcing it.

This anticyclone was bringing clear, sunny weather to many places, just as typical barometers indicate on their dials when the air pressure is high. However, there were many places, particularly along eastern coasts, where the weather was not sunny at all. In fact there was even some light rain about. Take a look at the satellite image below for details of where cloud was on the late morning of Thursday 19 April.

There was a lot of cloud over eastern regions, especially the east of North Island. The satellite picture showed some beautiful cloud forms over eastern Bay of Plenty... these are low clouds shaped by a combination of waves in the lee of the ranges and orientated perpendicular to the flow, and streets of cloud that are parallel to the flow. Having looked at the clouds from above, let's also look at them from below. I took this photo of the clouds over the eastern hills of Wellington in the late afternoon of Thursday 19 April, after a rather grey cloudy day in the capital. The barometer was indicating around 1036 hPa. 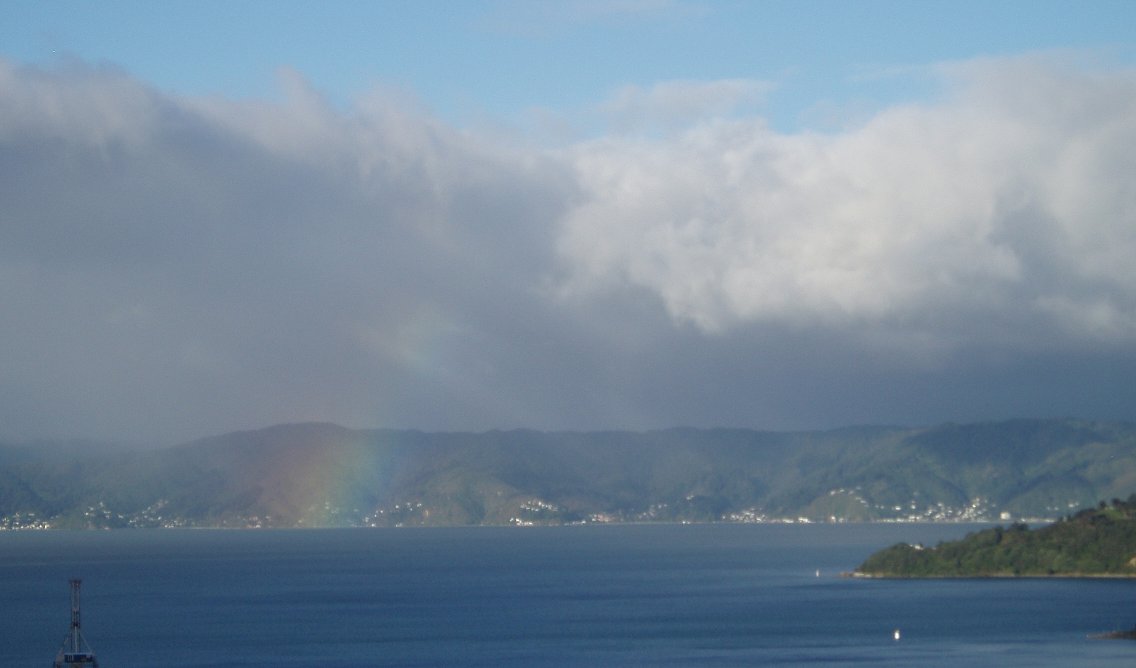 Why is it that not all Highs bring sunny weather? It's all to do with the upward and downward motions associated with them. Anticyclones generate sinking motion of air, as described in an earlier blog post . As the air sinks it becomes drier, and any cloud in it will generally evaporate. But this sinking air doesn't make it all the way to the ground and, in the case of the anticylone over New Zealand that day, there was a lot of moist air and cloud trapped just above the Earth's surface. Most of us live within a few hundred metres of sea level. If we are beneath an anticyclonic cloud, all we see is a cloudy day, even though the skies are blue above. If there's enough low-level moisture the clouds can generate light rain or drizzle too, though it doesn't come to much. Wherever the wind at low levels is blowing from the sea onto the coast, it's more likely that the air will be moist enough to bring cloud. That was the case for most eastern parts of New Zealand on Thursday 19 April, 2012. And there were some patches of drizzle and light rain about too. Most places in the west were sheltered from the low level flow, and were indeed getting clear sunny weather. So, with some interpretation, it's possible to deduce quite a bit from what the barometer is measuring!